I got my reMarkable recently and writing a few words about it will possibly not hurt anyone. This is not a product review, I much rather try to focus on technical aspects. Such as packaging the software and analyzing some of its features. 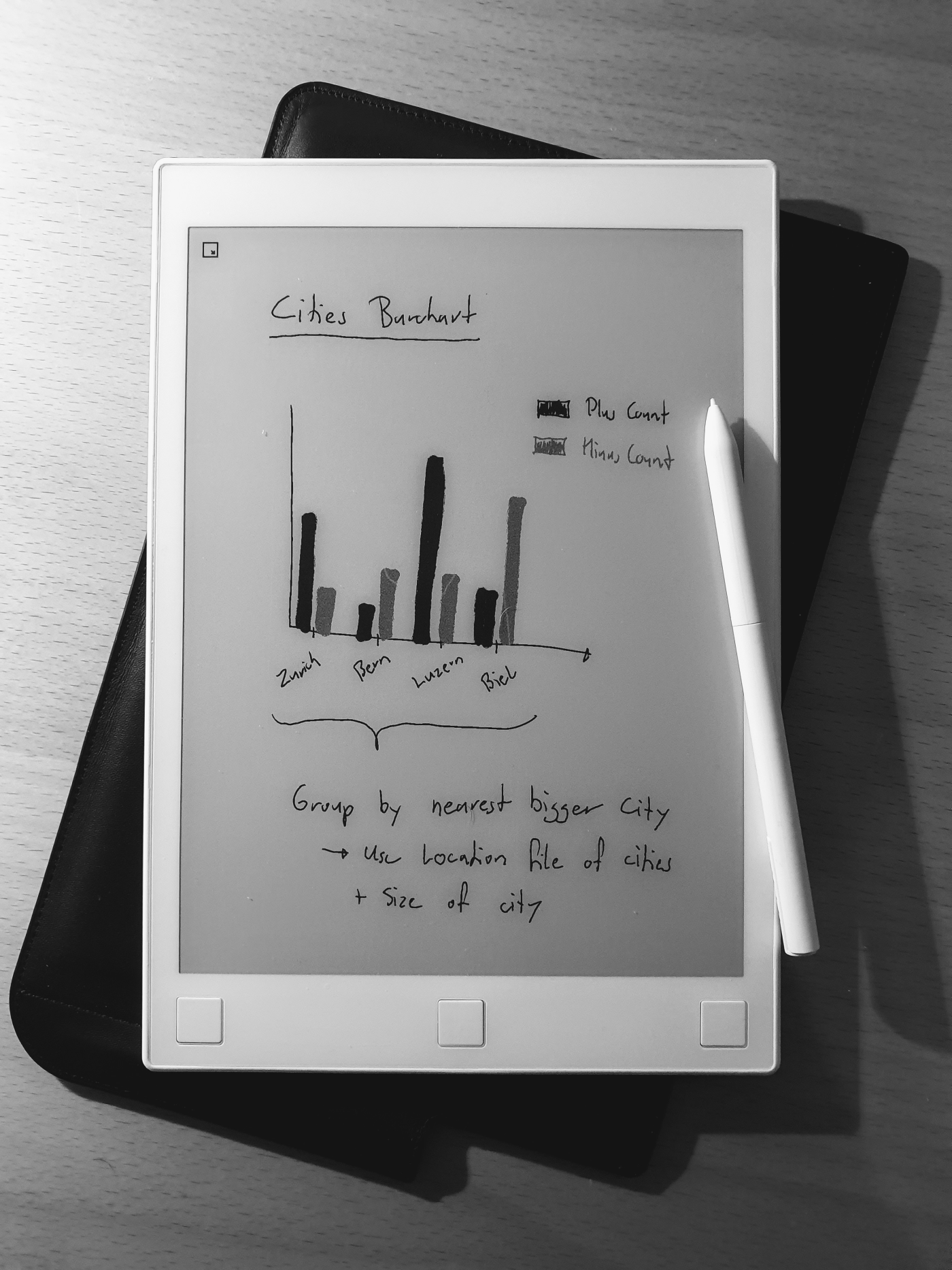 Sketching and writing on the device

reMarkable is an electronic ink tablet designed for writing. E Ink writing tablets promise excellent writing experience and a long battery lifetime. Which should make them a good replacement for paper. There are a few competitors on that market. For example the Ratta SuperNote, heavily featured on goodereader1.

My main use-cases for the tablet are to-do lists, meeting notes, mind maps, user interface mock-ups and ugly sketches. I bought an e ink tablet because I was fed up with manually digitalizing paper. I finally chose the reMarkable because all of the developers seem to be European cats and the ecosystem is hackable to at least some degree. Also they release frequently which is a big plus.

IANAA - I am not an artist

The device connects to the reMarkable cloud which has the main focus on document sharing and backup. There is an App for Android / iOS as well as a client for Windows and Mac OS. Sadly, the Linux client was discontinued in late 2017 2. For cross operating system compatibility the device can serve its files using a built in web server accessible via USB. When connected to the cloud, the device has some optical character recognition (OCR) capabilities and can convert documents to scalable vector graphics (SVG). The live view feature would be amazing but also requires the native QT app on the receiving end.

Software for the reMarkable and Some NixOS Derivations

In this section I am looking at software written for the reMarkable and because NixOS is awesome I also tried to create some derivations.

Using the NixOS packaging guideline for QT, and the following script:

I was able to quickly pin down all the dependencies and patch the distributed executable with NixOS specific rpaths 3. With the resulting derivation remarkable-linux-client.nix I can now run the client inside a nix-shell:

The application starts and connects to the cloud and all other features 4 work just fine. But I ran into big problems when displaying any of the drawings. All notebooks are completely empty. Without success I have checked the whole log for any hints which might indicate issues related to the packaging.

My best guess is that the reMarkable developers have changed the proprietary file format and the extremely outdated Linux client is no longer able to read that format properly. I got to this conclusion because the app logs the following when displaying a a drawing:

But this is just a guess. If you have a better idea what might be going wrong, I am curious to hear about them in the comment section. Having spent quite a few hours on this issue, I finally gave up getting the Linux client to work. Therefore I started looking for open source alternatives:

Accessing the reMarkable API With rMAPI

rMAPI is a Go app that allows you to access the ReMarkable Cloud API programmatically.

You can interact with the different API end-points through a shell. However, you can also run commands non-interactively. This may come in handy to script certain workflows such as taking automatic backups or uploading documents programmatically.

In short a great tool! Creating a derivation and using it under NixOS was easy. I opened a pull request to share my work with the rMAPI project. Then I created another pull request which adds this derivation to nixpkgs.

Lessons Learned: My initial Idea was to keep the full derivation in the rMAPI repository and just use that repository in the nix-expression added to nixpkgs. This approach did not work because it requires import from derivations (IFD), which are currently disabled in hydra 5.

With rMAPI I can now easily replicate the file sharing aspects of the native Linux client. But how can we get the live view to work?

Streaming the Framebuffer with srvfb

The idea is simple. We grab the framebuffer from the reMarkable and send it back to the computer where we then render an image. In its most basic shape this can be a 6:

The amazing project srvfb took this idea to the next level. From the README.md:

This repository contains a small webserver that can serve the contents of a Linux framebuffer device as video over HTTP. The video is encoded as a series of PNGs, which are served in a multipart/x-mixed-replace stream. The primary use case is to stream a reMarkable screen to a computer and share it from there via video-conferencing or capturing it. For that reason, there is also a proxy-mode, which streams the frames as raw, uncompressed data from the remarkable and can then do the png-encoding on a more powerful machine. Whithout that, the framerate is one or two frames per second, which might not be acceptable (it might be, though).

Running this on the reMarkable is super easy. The result is great and even the documented lag in non-proxy mode is acceptable. Problem solved. Thank you Merovius, keep up the good work!

My last pain point with the reMarkable is the missing hardware button for flight mode toggling. Because of battery lifetime I keep flight mode always on. But when I occasionally do need internet, the flight mode option in the settings is always a million clicks away.

I could not find a tool to get the flight mode working via button press, so I built something on my own. But before doing so, I familiarized myself with the internals of the device. For this I had to become root first. Good news! It is possible and super easy:

The remarkable File system structure is partially documented on the remarkable wiki. Some other locations I found interesting:

Enough of the playtime, let’s get cracking. Again, my goal is to toggle flight mode when the left and right button are both pressed at the same time. For this I have to listen on evdev events and once both buttons are pressed run rfkill block all to enable flight mode or rfkill unblock all to disable it again.

In my simple approach I am using evtest to parse the binary events from /dev/input/event*. First I cross compiled evtest with dockercross for the 32 bit ARMV7-A and copied the resulting binary to the reMarkable.

The following bash script uses the just compiled evtest binary to fetch and handle button press events on /dev/input/event2. With rfkill list | grep -q "Soft blocked: no" it then detects if flight mode is disabled and calls out to rfkill accordingly.

done!.. One downside coming from directly using rfkill, is that the user interface does not properly detect this state change. Which means we can get the reMarkable into weird states where the device is connected to a network with the flight mode icon on. Rebooting the device recovers the clean state again. But let us call this a feature, shall we?

After having used the reMarkable for a few weeks now I am still very satisfied with the product. The overall user experience is very good. And the graphite tips don’t wear out too fast. For the future I would like to see the following features implemented:

Maybe we get all this with the reMarkable2. It seems that a new device is on its way. reMarkable has filed a request for certification by the FCC (ID: 2AMK2-RM110) which contains a wealth of pictures and specs. But in a letter correspondence from the 22. November 2019 they requested the dismissal of that FCC ID. Whatever that means…

Wrapping up, the reMarkable is a perfect example how open devices can encourage a community to make so much more out of a already great product. I sincerely hope that the company stays as open as it is right now 7 and no money hungry manager or acquiring company destroys what they built so far.